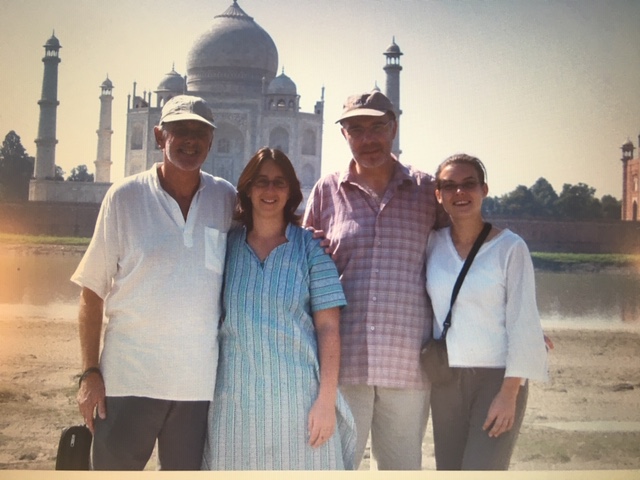 Tomorrow, cousins and friends meet up to celebrate Uncle Ian’s passage on Earth. This is a story of when we got invited to the Maharaja’s birthday.

Talking to people was Uncle Ian’s magic. He knew how to strike a conversation with any person or circumstance. Had a question on hand, something kind to say, in good balance of curious and care.

I would like to share one peculiar evening we had in Jaipur. To set the tone, let’s go a few months back in an english garden, where the trip actually started.

He greeted me with a « Je regarde pousser l’herbe ». He was sitting, watching the grass grow. That’s my kind of tempo. I like taking time to watch. That’s when my eyes connect to everyday beauty.

When he later casually said « You should come to India with me ». It felt easy. And opened the door to a trip slow and immersive. He set up a small group of 4 with Martin and Virginie to travel 3 weeks in North India.

After a week under Himalayan stars, we were in Jaipur visiting the Palace. There was a particular agitation going on: chairs were being set up, furniture moved around. The movement peeked our curiosity. Uncle Ian nonchalantly asked one of the guards:

Surprised, he asked a second time, receiving the same response « Atcha again ». We kept it at that.

We went about our day without thinking much about it. In the evening we put on our best clothes (the less wrinkly ones) and rickshawed our way to the Palace. We weren’t fully expecting to actually get in and happy to give it a go.

We showed up at the gates, passed the one the two and the three. Guards welcomed us, we weren’t asked questions of what our business was, or that a private event was taking place and we had to come back tomorrow. As we walked in the main salon where chairs had been set up earlier, the Maharaja’s personal secretary approached Uncle Ian and said « Come, come ». He seated us in the second row to watch the show.

I asked. Uncle Ian had never met the gentleman. It could have fooled me. He acted as if he knew him and that it were only natural he were present. There was a fondness in his eyes. He tended to us all evening,

Later at the party, he introduced us to the Maharaja, the extraordinary dancer who had put on the show and invited us to her school in Delhi, a woman who had been the ﬁrst female pilot in India, and other dignitaries. When I saw the large bowls of Gulab Jamun on the buffet tables, I ﬁgured the Gods were in on it. It was his favorite desert, he would smile in any place he saw a jar full.

It was one of those nights where Life picks you higher than your own speed. You enjoy the ride, barely blink out of constant enchantment.

Going on a trip to India with Uncle Ian was special in itself. He had tuned travelling rhythms so that we could adjust and process new information and gently soak it all in.

He met everyday with curiosity, open to connect and share a moment. Taking time, having a joke or a kind word. Encounters felt like meeting with friends and neighbors.

When we were ﬂying back home he warned « You are going to think you are different. You are not. Your Life is the same. »

Or is it ? It might have highlighted some essential ingredients, valid worldwide.

Talk to people. Take your time. Be kind. Share a moment. Be curious. Care. Watch the grass grow. Show up as if you are expected, maybe you are.

That’s my kind of LOVE.